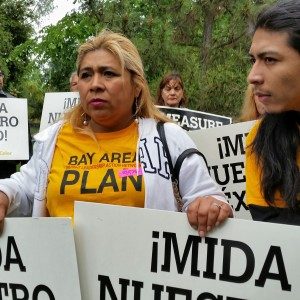 On May 7th, PLAN leaders traveled to the state Capitol to tell the board of education to “Measure Our Success”. Read more to find out how parents are helping shape how California’s school funding law involves parents. PLAN leaders Che Phinnessee and Marina Munoz and myself participated in a statewide mobilization to Sacramento to call on the State Board of Education (SBE) members to establish strong standards for the evaluation of school districts’ implementation of the Local Control Funding Formula (LCFF). LCFF is California’s sweeping education reform plan which was created to promote equity and transparency to improve student achievement. Che and Marina are both elected members of Oakland Unified School District’s Parent Advisory Committee (PAC), where they represent parents of District 7. OUSD is supposed to consult with the PAC in developing the Local Control Accountability Plan (LCAP), a three plan that aligns the budget with eight State priority areas established under LCFF.

We began our two-hour journey from East Oakland before sunup. Upon arrival we were greeted by rain and cold wind. After a quick breakfast we made our way to the SBE building. Once there, we connected with allies, some of whom traveled longer distances to participate in the day of action. Students made the call to march around the building. We were handed signs that read “Measure Our Success” and we made our way outside. The rain kept pouring and the cold wind persisted. At first we were not too convinced about marching in such conditions, but our spirits grew with every chant of Sí se puede and soon enough our thoughts and actions were focused on the purpose of the day.

After the energizing march and rally we made our way back to the SBE building to testify and call on the members to clearly spell out benchmarks for authentic parent and student involvement. The docket for testimonies was extensive and Che and Marina were slated to testify towards the end. When their turn was approaching, they stood up and joined the line behind the speaker’s podium. Che was the first to speak.  She talked about how her and parents organized at Reach Academy Elementary School to secure a community assistant position through the SSC process and how they created a strong parent volunteer system to improve the school. During our debrief, she told me that she kept her message short and sweet, but was direct in asking for strong metrics to assess the impact of parent engagement and identify strategies for increased engagement. Marina followed Che’s testimony. Prior to ascending to the speaker’s podium, Marina told me she was going to stick to the talking points she had prepared. Once speaking, however, Marina’s passion and the spirit of the day overtook her original intent and she shouted chants of parent power and Sí se puede, to which many in the room followed by applause.

The journey to Sacramento is not easy for our leaders who have to sacrifice time with family and personal obligations. But it is worth it when it comes to standing up to justice and working with allies to demand what we need to have an equitable education system. I felt inspired by watching our leaders uplift the struggle and success of the parents that couldn’t be there and also to call for a broader movement where parents have the power and the tools to make the education system work for all of us.